Today we presented the winner of our global warming essay competition which we started in 2017. We had a huge response from schools across the south coast and after much deliberation we selected Durrington High School in Worthing to be the winner. 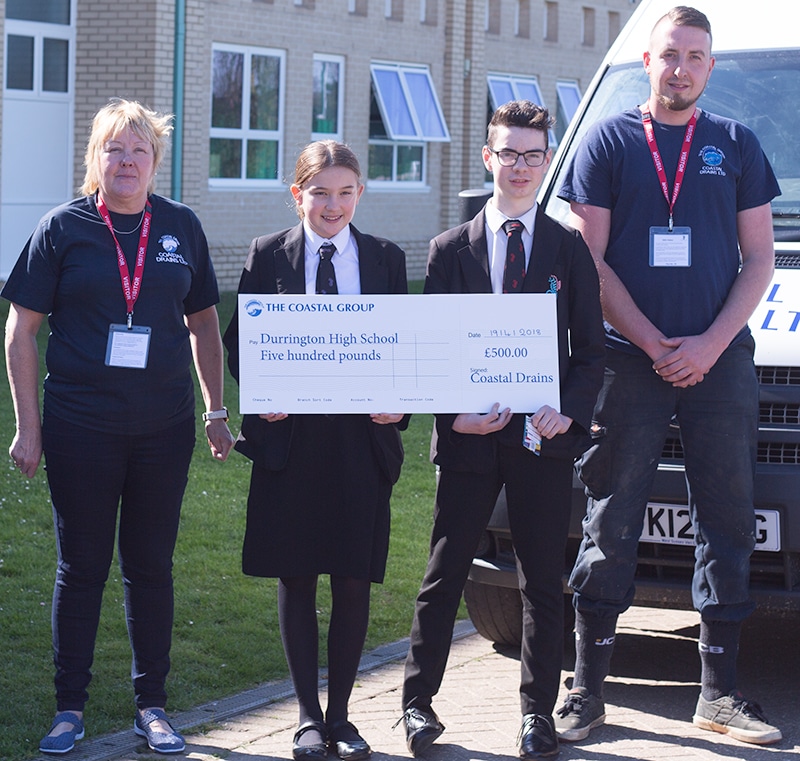 Two pupils were selected for their well crafted and passionate essays on climate change. Hope Waite Jones and Eddie Pullen both wrote excellent essays and were worthy winners. So, we would like to say a huge thank you to Durrington High School and both Hope and Eddie!

“Ice storm rolls from Texas to Tennessee – I’m in Los Angeles and it’s freezing. Global warming is a total, and very expensive, hoax!” On 6 December 2013 7:13 am

It’s not a hoax its very real and it is killing our planet and our animals.

Global warming can cause:

The oceans have got warmer too, with the top 700 meters of ocean showing warming of 0.302 degrees Fahrenheit since 1969 according too global climate change.

Furthermore, according too global climate change, since the beginning of the Industrial Revolution, the acidity of surface ocean waters has increased by about 30%.

This is our future unless we act soon and think about our future.

If we have more drought seasons we will not be able to grow crops due to the hot weather and we might end up with a hose ban so we might not be able to water our plants. If we keep emitting this amount of carbon dioxide we will destroy the world we live in.

I believe global warming exists because in the last two decades of the 20th century have been hottest in the last 400 years, according to climate studies according to FF Conserve Energy Future. Also, according to FF Conserve Energy Future Sea levels have risen about 7 inches in the in the last 100 years, which is more than the previous 2000 years combined. The rising sea levels could threaten the lives of people living along the coastal areas also according to scientist believe carbon dioxide and other greenhouse gases are now at their highest concentrations for more than 800,000 years. Moreover, the current warming trend is of particular importance because most of it is extremely likely (greater than 95 percent possibility) to be the result of human activity since the mid-20th century and proceeding at a rate that is unprecedented over decades to millennia. Earth-orbiting satellites have allowed scientists to see the big picture, collecting information about our planet and its climate on a global scale.

To summarise, global warming rates need to decline and fast. In order for the human race to continue flourish.

I am writing to you to inform you of the dilemma we are slowly falling into. The force of global warming trapping us for generations. Sea levels rising, glaciers melting, cloud forests dying and wildlife going extinct; it’s coming to my attention that humans are the main cause of the past centuries increase in global warming. Therefore, this has a large impact on the more rapid shift on climate change. This must be stopped! What measures must be taken to prevent global warming and how do we do this? A vast array of questions being contemplated this very moment, but still no solution. This is my view of global warming, climate change and how we can prepare for what’s to come?

I’m a climate change activist and believe that anthropogenic climate change is real. From this, I know that we are entering an irreversible time, in which our planet is being consumed by global warming. Firstly, I feel the greenhouse effect has a great impact on climate change. I know this because many gases are produced in the green house process. For example: carbon dioxide, methane, nitrous oxide and water vapour. I’m not saying that all of these are affecting the climate, but these emissions build up over time and together, in large amounts, affect the wellbeing of your planet. Over the last century, the burning of fossil fuels like coal and oil has increased the concentration of the greenhouse effect.

Especially, the rise in Co2, which is created when the burning of these fossil fuels takes place. Another human act is the use of high cost and fossil fuel eating machines: known as factories or power plants. These monsters produce all different gases. From Co2, nitrogen oxides to even sulphur dioxides. To put this into perspective, coal a main fossil fuel used to run big plants like these ‘generates 44% of our electricity’. This means that the 44% is being turned straight into harmful gases and in time are affecting global warming. As well as this, we are also going to experience more smog, soot, acid rain and toxic emissions if this doesn’t come to a halt soon.

In my opinion, I think the use of more natural and renewable fuels is needed because they contribute nothing compared to coal for example. Although, renewable fuel sources cost more and will take time to interpret into everyday life. These factors do not put away the fact that if we do not stop global warming we will take a massive risk and will

end up in an unstoppable crisis. There are different systems that could be used instead of artificial fuels. You could use different biofuels, which are more environmentally friendly; solar panels which create your own source of electricity right from the sun; or wind farms that generate energy when its windy. It is also a fact that we roughly have ‘350 years left of fossil fuels’ (from BBC bitesize page) meaning we must change if we want to carry on developing as a planet. My idea is only one way in which you could slow down the rate of climate change. Therefore, the government can put limits on greenhouse gas emissions.

In conclusion, we must make the step and start to realise what we are doing. The global warming and climate change increasing every day. It’s not stopping unless we do! The greenhouse gases can be slowed down and over time will benefit us in the future. That’s nowhere near it but we must act now.

Thank you for taking your time to read my response on how to prevent climate change.

Once again thanks to everyone that took part, and we look forward to running a new competition soon!

All the best
Coastal Drains Ltd