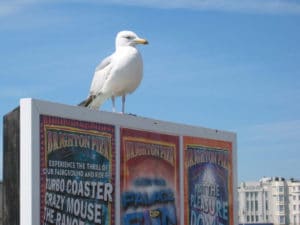 To literally keep the waste out of their backyards, the Victorians built a sewage system with tunnels spanning some 44 miles, running under the city with four major channels: one coming in from Hove, one from Kemptown, one from via London Road and one via Lewes Road. Needless to say, those Victorian engineers really knew how to build structures that would last the test of time.

Today, Brighton’s lanes are one of the most popular tourist attractions in Brighton. People flock to the lanes from all over the world, keen to walk the historical cobbled lanes and sit in the quirky pubs with their uneven floors and low ceilings. But the lanes were not always this way…Back in the 1700’s, old cobbled cottages looked quaint and quiet in what once made up a slum-like village. Sewage trickled through the streets and down into the storm drains before eventually draining out into the sea. However, more often than not that same sewage would end up washed up on the beach again, sitting in putrid piles, the stench of which would frighten away tourists and other visitors. Even worse, at times of heavy rainfall (not uncommon in England, as we all know), the porous chalk that cottages were built upon allowed this raw sewage to seep through the basement walls of the cottages and gradually fill up the people’s houses…what a lovely thing to come home to find.

In 1750, Dr Richard Russell changed the future of Brighton forever when he publicly suggested that the waters of Brighton could cure all manner of ailments, and the residents of London started making a beeline for the coast. The town very rapidly became one of the most popular sea bath resorts in the country and it was the fastest growing town in the entire country. However, due to the building works happening faster than any provision for sewage or mains water, the issues with sewage were creating terrible health implications on Brighton’s residents and visitors. With the sudden influx of tourism something had to be done about the local sewage issue. And yet, throughout the mid-1800’s, most of Brighton’s sewage continued to drain into cesspools at the back of people’s houses.

In order to deal with this problem, in April 1849, the General Board of Health’s inspector, Edward Cresy made a detailed report on the state of the town’s sanitation with regard to the adoption of the Public Health Act. It is unsurprising that he found several thousand cesspits cut into the chalk, many of them near drinking water wells and only 32 out of 186 streets fitted with sewers at all! It makes for grim reading, with cases of “wells with rope but no buckets”, of cesspits that “Never require emptying” and of “stable manure oozing through adjacent house walls”.

If that doesn’t destroy your appetite, I don’t know what will.
A major cholera outbreak in Brighton’s slums and campaigns by ‘The Lancet’ in mid-19th century against the town’s laggard response to urban health, eventually resulted in a major sewer building programme. It was time to sort the mess out on the streets and the beaches. Finally, in 1860 the town council resolved to build a system that would drain sewage into the sea properly. In 1874, Sir John Hawkshaw designed a great seven-mile-long brick-lined sewer to transport the sewage from Portobello on the Telscombe Cliffs. This included the introduction to intercepting sewers, ventilating shafts and extended outfall pipping. Relying solely on manual labour, a sewage system was built that still serves Brighton to this day. And yes, this raw sewage was pumped directly into the sea. Raw sewage was still flowing from the aging tunnels right into the sea up until the 1990’s.

During the late 1990’s a giant storm water collection drain – wide enough to drive a vehicle through – was constructed along the beach. To construct this drain, the workers used tunnelling machines similar to those used to cut the Channel Tunnel. The drains were then lowered to the tunnel depth via several deep shafts sunk at intervals along the beach, which were subsequently capped and covered. Pebbles were replaced on top of the shafts to return the beach to its former appearance and allow it to be available, once again, for public use. Restoring normality and fresh air to Brighton and its beaches.

The Victorian sewer systems have informed generations of civil engineers. These cavernous structures inspire imagination and have hosted many film makers and musicians to perform within their echoing walls. An engineering feat of 44 miles of tunnels and 7 million bricks, there is a whole new world 40ft below the streets of Brighton. It really is an architectural jewel! Even today, the Victorian sewers help dispose of around 22 million gallons of waste water in the Brighton area every day. But in wet, stormy weather that can rise to 90 million!

One of the biggest problems facing Brighton’s sewage systems today is fat, oil and grease. Coming in from kitchens across Brighton and Hove, it has to be scraped off of the walls to prevent blockages and even flooding. In the early hours of the morning, tonnes of grit and other solids are removed from the sewers – giant vacuum pumps doing the work that men would have done by hand all those years ago.

We would definitely recommend a tour of Brighton’s sewer systems, open between May and September. The tours run through 366 metres of sewage tunnel, starting at the Brighton Palace Pier and ending by popping out of a manhole. The sewers, now operated by Southern Water, have been open for public tours since the early 1960s. The tours are guided by Southern Water engineers and inform participants of the technology, history and numerous curiosities of the system. It is an experience not to be missed!
The Victorian Sewers have really stood the test of time as one of the most incredible feats of engineering in British history!