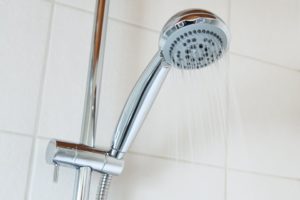 Drain blockages can be caused by a number of things such as hair, soap scum, debris, pet hair, dirt and more. All of these things can cause slow draining and unpleasant odours. Long hair is a common culprit of the blocked drain, wrapping around parts of the drainage system and filling with clumps of soap and dirt becoming increasingly difficult to move.

Soap is one of the main blocked drains causes. Traditional soap bars are made with grease or fat and this can build-up in your drain, causing clogs to form, restricting water flow.

If you have long hair, you’re no stranger to hair blocking the drain. Hair build-up in showers is one of the most common blocked drain causes in the UK. However, the issue can be significantly reduced by putting a protective screen over the plughole.

Dirt builds up in your shower over time – particularly if you have a very active labouring job. And we often don’t think twice about washing dirt down our drains. However, dirt can build-up in shower drain pipes, settling on the edges and forming blockages.

Unfortunately, once drainage problems have begun, they will usually get worse over time unless you act quickly. The sooner you deal with the problem, the easier it will be to resolve. But before you ring a plumber, there are a couple of ways you can try to fix the problem yourself.

How to unblock your shower drain, fast